Ergo’s assets include: access to tailings deposited across the western, central and eastern Witwatersrand; a 50km pipeline; and tailings deposition facilities including the significant Brakpan/Withok TSF. Material processed by Ergo is sourced from primary surface sources namely, sand and slime.

Sand is reclaimed using mechanical front-end loaders, re-pulped with water and pumped to the plant. The surface sources have generally undergone a complex depositional history resulting in grade variations associated with improvements in plant recovery over the period the material was deposited. Slime is reclaimed using high pressure water monitoring guns also known as hydraulic reclamation. The re-pulped slime is pumped to the plant and the reclaimed material is treated using screens, cyclones, ball mills and Carbon-in-Leach, or CIL, technology to extract the gold.

The Ergo plant currently treats around 1.7Mtpm of material. The material is delivered via two feeder lines from the Elsburg tailings complex, Van Dyk and the 4L30 reclamation sites. A further 0.5Mtpm is delivered from the City Deep area (including 4L2, 3L42 and externally sourced material). The Ergo plant has a capacity of 1.8Mtpm based on a 92% availability. The Knights plant has capacity of 250ktpm. Material treated is deposited onto the Brakpan/Withok TSF shared with the Ergo plant. With Knights’ rapidly depleting reserves, opportunities are being evaluated to reclaim material from more challenging environments such as remnants left from historic mining activities and environmentally sensitive areas like wetlands, resulting in the rehabilitation of severely degraded areas. 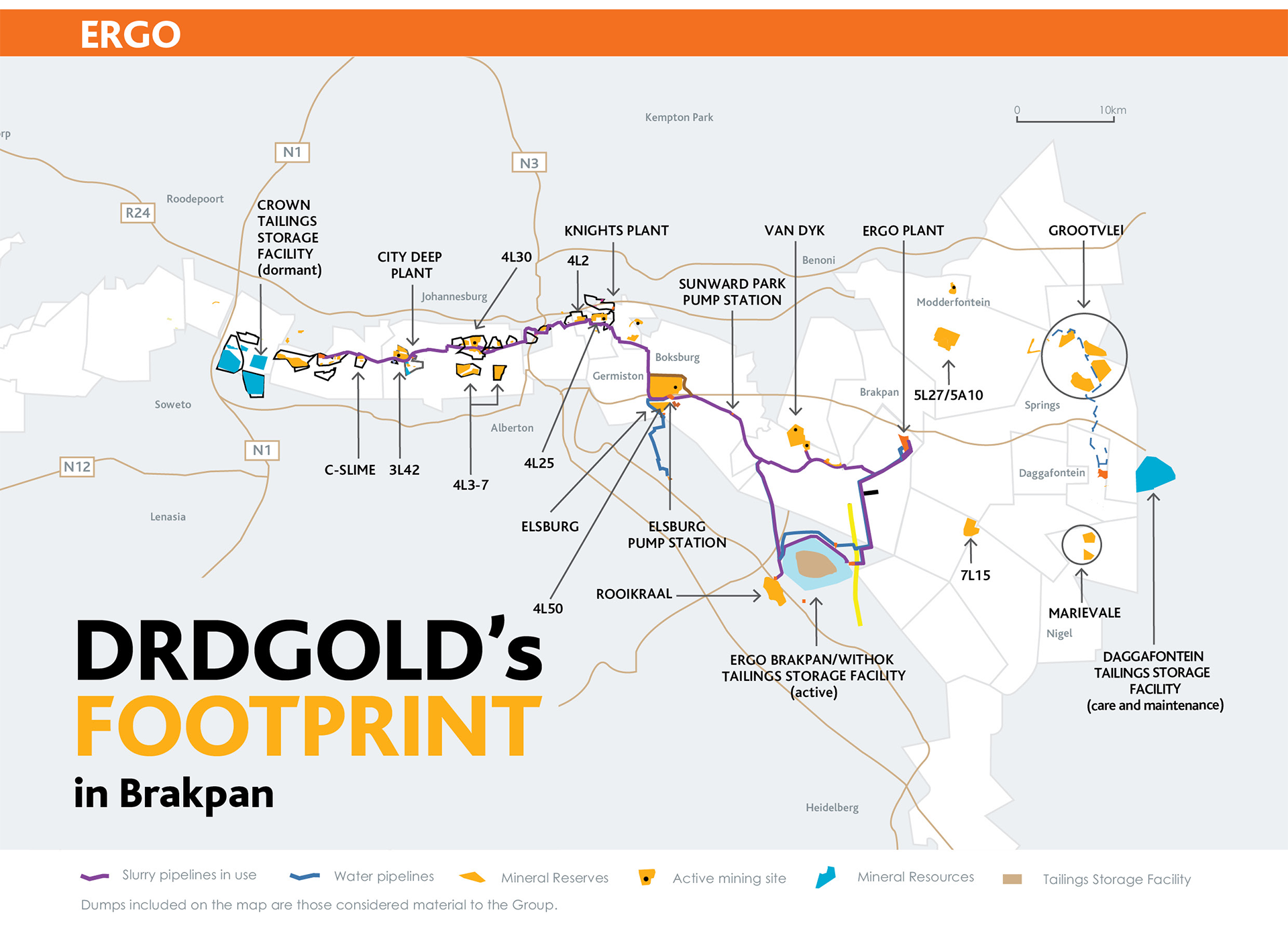 A rising gold price in the mid-20th century and advances in technology have made the retreatment of surface dumps a viable business. The retreatment process involves the extraction of minute particles of gold from past mining 'waste'. Until recently, DRDGOLD operated four metallurgical plants, two of which were approaching maturity. The flagship Ergo plant in Brakpan, possibly the largest in the world and with the required treatment capacity, was well-positioned to take over but was located up to 50km from many of the slimes dams and sand dumps in the west, earmarked for future retreatment.

DRDGOLD addressed the situation by streamlining its operations and restructuring the company. In order to bring to account the resources on the western side of town, the 600 000tpm, 50km Crown-Ergo pipeline was constructed to link the assets. The pipeline was constructed of steel and innovative technology was used to install the high-density polyurethane (HDPE) lining. These design elements proved to be energy-efficient and in FY2013 an 18% reduction in pipeline power consumption was recorded. The pipeline was completed on time and within budget. The total project cost of R305 million included the pipeline (R260 million) and the upgrades to the plant which were necessitated by the additional material delivered by the pipeline.

As a result of the additional material brought to the plant by the pipelines, the Brakpan plant’s second carbon-in-leach (CIL) circuit had to be refurbished. Completed in early 2012, the refurbishment increased the plant’s capacity and in FY2015 the refurbishment of another five CIL tanks increased targeted monthly retreatment throughput to 2.1Mt. The Brakpan tailings deposition facility (BTF) has been modified to increase the capacity of the site and by incorporating the Withok TSF footprint, the capacity can be extended to over 750Mt. The BTF is an integral component of the retreatment process and ensures the ability of the Ergo operation to continue treating waste material long into the future.

Together the solidly built Ergo plant in Brakpan; the satellite Knights plant in Germiston; the former plants – now milling and pump stations; the network of pipelines – including the 50km Crown-Ergo line; the surface rights, licences and rights to access the dumps themselves; and the all-important tailings deposition site give DRDGOLD an unrivalled advantage in the industry and make tailings retreatment a profitable business that has the added advantage of being low-risk. 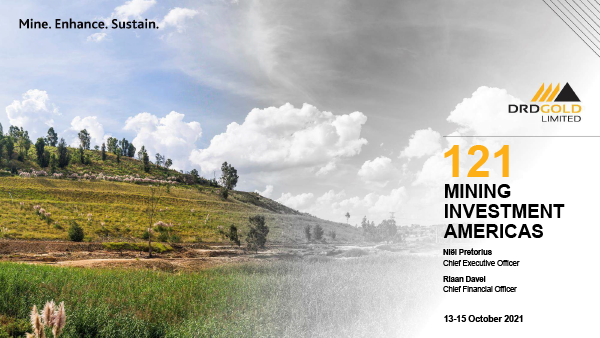